In literature, plenty of information can be found on the effects of fibre modification of asphalt mixtures. However, there is limited information on polyacronitrile fibres. Preliminary work was provided by Slebi-Acevedo et al. (2019 and 2020) and Bueno and Poulikakos (2020), who studied polyacrylonitrile fibres and aramid fibres comparatively. Similar mechanical properties were found, however, better thermostability was identified for polyacrylonitrile fibres. This study provides more basic information on the combined effects of polyacronitrile fibres and reclaimed asphalt planings (RAP) on performance properties of asphalt mixtures in various temperature ranges.

Six asphalt mixtures were produced in laboratory, always following a standard mix design concept for asphalt binder courses with maximum aggregate size of 22 mm (according to German technical specifications, TL Asphalt-StB, 2013). Natural aggregate of the type Gabbro and a target binder content of 4.4% were used for all mixtures. The gradation curve is reported in Fig. 1. 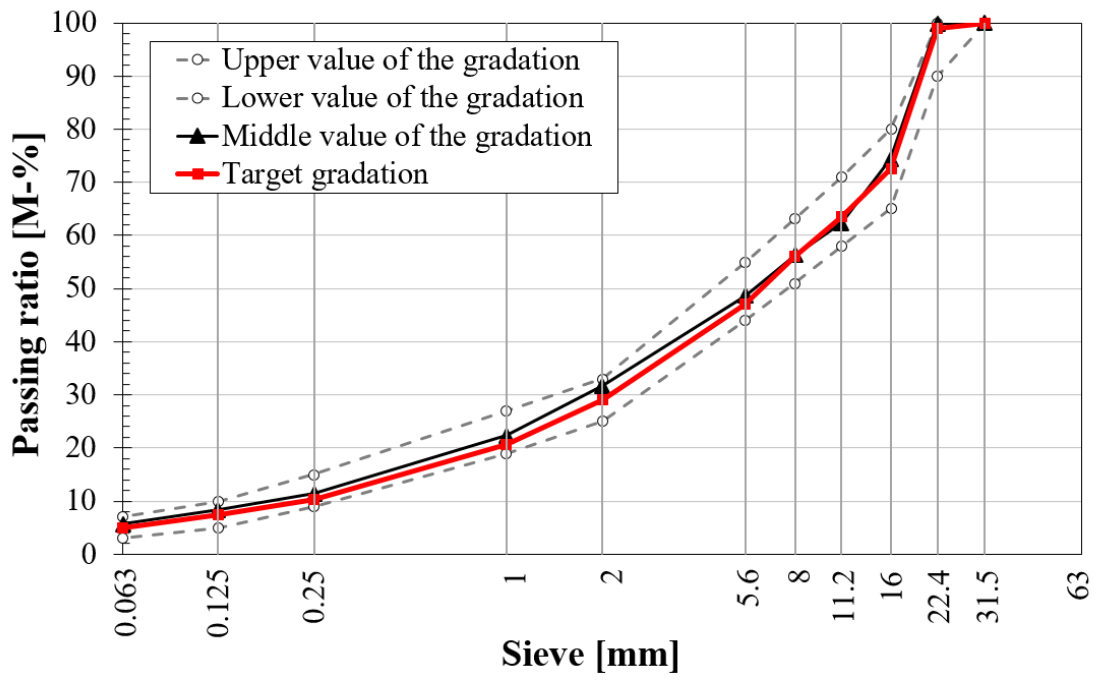 Properties of the binders

Polyacrylonitrile fibres were used in the present study with a nominal length of 4 mm and a nominal diameter of 10 μm, their appearance is illustrated in Fig. 2. Some characteristics of the fibres, provided by the producer, are listed in Table 2. More information on thermal and chemical properties of these fibres, and of the microstructure of polyacronitrile fibres incorporation with mixtures can be found in Bueno and Poulikakos (2020).

Three asphalt mixtures were prepared with fresh materials only (Table 3): two asphalt mixtures were produced without incorporating fibres, one using unmodified penetration grade plain binder of the type 50/70 (acc. to EN 12591, 2015), which was in the following used as reference mixture and therefore was identified as Ref. For the other one, polymer modified binder of the type 40/100-65 Pen Grade (acc. to DIN EN 14023, 2010) was used and identified as PmB. The third one was a fibre reinforced asphalt mixture (FRAM), composed of reference bitumen 50/70 Pen Grade and polyacronitrile fibres by 0.15% of the total weight of the asphalt mixture, as suggested by the producer. The fibres were added directly to the drum together with the pre-heated aggregates and filler and they were mixed for around 1 minute. Then the pre-heated bitumen was added and mixed for another 2 minutes.

Asphalt mixtures investigated in this study

A RAP source originating from a 10 years surface course in Lower Saxony, Germany was used. The binder type within the RAP source was originally a plain binder with a Pen Grade of 50/70, which is characterized today by a Penetration of 18.6 dmm and a softening point of 65°C.

The physical, geometrical and mechanical properties of the RAP sources were determined in accordance with European Standards: Bitumen recovery through rotary evaporator (EN 12697-3, 2013); determination of particle size distribution (EN 12697-2, 2015); determination of maximum density (EN 12697-5, 2019); and considering the material specifications for reclaimed asphalt given by EN 13108-8 (2016).

In particular, the black curves and the white curves (after binder extraction) were determined of five different RAP samples (Fig. 3), each of a mass of 2500 g. For these samples an average binder content of 4.93 mass-%, and a maximum specific gravity of 2.925 g/cm3 were identified. 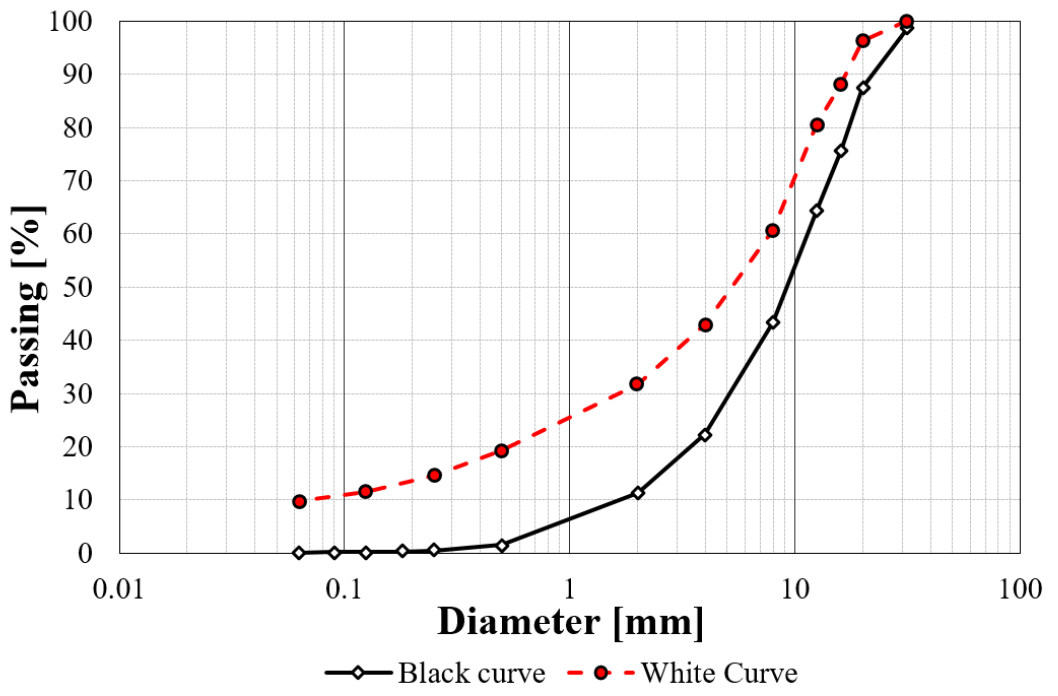 Prior to performance testing, the asphalt mixtures where compacted in the laboratory to obtain slabs, according to the German segmented steel roller compaction method (Wistuba, 2016). These slabs with dimensions of 500 mm × 180 mm × 100 mm were used to perform wheel tracking tests, while for indirect tensile tests cores of 100 mm in diameter were drilled from the slabs and shortened to a length of 40 mm, and for the thermal stress restrained specimen tests prismatic asphalt beams with dimensions of 50 × 50 × 160 mm3 were sewed from the slabs.

Permanent deformation resistance was tested through Hamburg wheel tracking test (large device). During the test, the slabs (two samples for each asphalt mixture type) were repeatedly loaded by the passing rubber wheel at a constant temperature of 60ºC. As a result, absolute rut depth was determined after 20000 load cycles, and the mean slope of the rutting curve was calculated after any 1000 cycles.

During the indirect tensile test, a cylindrical asphalt mixture specimen with a diameter of 100 mm and a height of 40 mm was subjected to a continuous sinusoidal load at a frequency of 10 Hz and at a constant temperature of 20ºC. Through the vertical load, a state of strain is produced in the middle of the specimen that provokes micro-cracks which accumulate until failure (significant change in stiffness modulus due to macro-cracking). Five load amplitudes σ0 were applied (Table 4), where the smallest loading amplitude provoked failure after 106 load cycles, while at the largest amplitude the specimen resisted at least 103 cycles without failure. At least three samples for each of the five stress levels were tested. From these tests, the number of load cycles Nmacro (when energy ratio reached its peak value) is obtained, as well as the material characteristic fatigue law represented by the Wöhler curve. Detailed information on parameter calculation can be found in a previous study (Walther et al., 2019).

To evaluate the performance of the mixtures at low temperature, the Thermal Stress Restrained Specimen Test (TSRST) was carried out in accordance with EN 12697-46 (2012). During this test, the specimen is held at constant length, while its temperature is decreased from a starting temperature of +20°C, with a constant cooling rate of ∆T = -10°C/h. A close-loop control system keeps specimen at constant length. Due to the prohibited thermal shrinkage, the specimen is subjected to an increasing (cryogenic) tensile stress. The test ends at a minimum test temperature of T = -40°C or at failure, when the cryogenic stress reaches the tensile strength of the asphalt sample. As a result, the temperature at fracture, TF, and the corresponding stress, σF, are registered.

The results from wheel tracking tests in terms of absolute rut depth after 20000 cycles and slope of the curve at 1000 cycles are summarized in Table 5.

All asphalt mixtures prepared with fresh materials show good rutting performance. In particular, PmB mixture shows highest rutting resistance, while for Ref. mixture is the worst. Using polyacronitrile fibres is of advantage if compared to the reference mixture, however PmB mixtures performed better.

In the case of asphalt mixtures prepared with RAP, improved rutting resistance was found. This was attributed to the aged hardened binder contained in RAP materials, improving the stiffness of asphalt mixtures in general. For Ref.+RAP material rutting performance is worst, while the FRAM+RAP material showed highest resistance to permanent deformation. Therefore, it can be concluded that the use of polyacronitrile fibers and RAP improved resistance to permanent deformation.

In Figs. 4 and 5, the Wöhler curves and initial stiffness values obtained at same stress levels are illustrated for all tested materials.

As shown in Fig. 4, acceptable repeatability was found at each stress level for all mixtures. Wöhler curves of the asphalt mixtures produced with fresh materials result in correlation coefficients (R2) above 0.9. FRAM material results in best fatigue performance for higher strain levels (higher than 0.6 ‰, which is the value of the intersection between the two fatigue lines of FRAM and PmB mixtures), since the slope of the fatigue line of the PmB material is higher than the slope of the FRAM mixture. However, considering all strain levels, fatigue resistance of FRAM material can be evaluated between PmB material and Ref. material, indicating an inferior fatigue performance with respect to PmB material, and a better fatigue performance with respect to Ref. material. This can be attributed to the much higher initial stiffness level observed for FRAM material in comparison to PmB material (Fig. 4b).

Results from indirect tensile tests for asphalt mixtures produced with fresh materials: a) Wöhler curves (Nmacro vs. initial strain level for the mixtures at f=10 Hz and at 20°C); and b) initial stiffness modulus vs. stress levels applied

Regarding the mixtures containing 50% of RAP (Fig. 5), i. e. FRAM+RAP material and the reference material Ref.+RAP, similar fatigue resistance was observed. However, the fatigue lines are almost in parallel to Wöhler curve of PmB+RAP material. In general, Wöhler curves are very close to one another, indicating almost comparable fatigue performance (Fig. 5a). This can be attributed to the effect of RAP on fatigue performance, as very similar initial stiffness values (Fig. 5b) were registered for the three different asphalt mixtures.

Results from indirect tensile tests for asphalt mixtures produced with RAP: a) Wöhler curves (Nmacro vs. initial strain level for the mixtures at f=10 Hz and at 20°C); and b) initial stiffness modulus vs. stress levels applied

The results of thermal stress restrained specimen tests are summarized in Table 6. When using fresh materials only, it can be seen that the addition of polyacronitrile fibres to 50/70 binder has a positive effect on fracture temperature, but not on fracture stress. FRAM material shows lower fracture temperature and fracture stress compared to Ref. material. Moreover, FRAM material does not perform as well as PmB material.

Regarding the mixtures with RAP, similar values were obtained for FRAM+RAP and Ref.+RAP materials, considering both fracture temperature and fracture stress. However, for PmB+RAP materials best thermal properties are obtained.

The test results were analyzed in view of the influence of polyacronitrile fibres, and in view of using RAP. From the experimental analysis the following conclusion can be drawn:

This study was part of an international project entitled Fostering the implementation of fibre-reinforced asphalt mixtures by ensuring its safe, optimized and cost-efficient use (FIBRA). The financial support of CEDR Project from the European Union is gratefully acknowledged.

Go to ContentsGo to Main NevigationGo to Footer